THE PARABLE OF THE WEEDS AMONG THE WHEAT

THE PARABLE OF THE WEEDS AMONG THE WHEAT 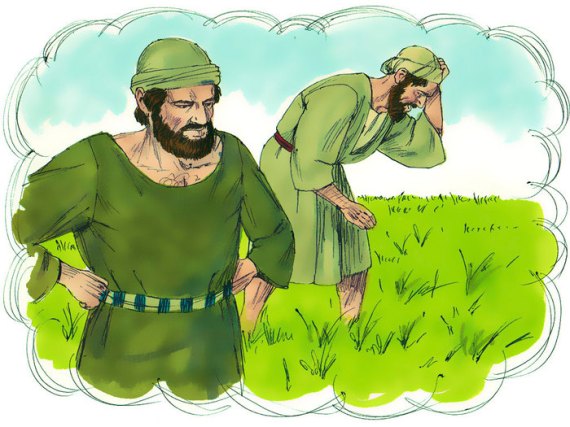 Another parable He put before them, saying, “The Kingdom of heaven may be compared to a man who sowed good seed in his field; but while men were sleeping, his enemy came and sowed weeds among the wheat, and went away. So when the plants came up and bore grain, then the weeds appeared also. And the servants of the householder came and said to him, ‘Sir, did you not sow good seed in your field? How then has it weeds? He said to them, ‘An enemy has done this.’ The servants said to him, ‘Then do you want us to go and gather them?” But he said, ‘No; lest in gathering the weeds you root up the wheat along with them. Let both grow together until the harvest; and at harvest time I will tell the reapers, Gather the weeds first and bind them in bundles to be burned, but gather the wheat into my barn.’” (Matthew 13:24-30 RSV)

In the longer form of today’s Gospel, Jesus added two other short parables which depicted His Church as having a very lowly and very small beginning but, in due course becoming a large and world-wide institution. The Apostles seem to have grasped the lesson of these shorter parables, but they asked Him to explain the one about the weeds. According to most present-day commentators the explanation of the parable is Matthew’s own and was not given by our Lord. But, as Matthew’s explanation has the guarantee of inspiration behind it, the lesson we are to learn from it is still the same.

The lesson is that in the Kingdom of Christ on earth, His Church, there will always be sinners and scandal-givers who will make the Christian life more difficult for Christ’ sincere followers. The weeds were among the wheat from the very beginning; one of the twelve, Judas Iscariot, was a traitor and betrayed our Lord for thirty pieces of silver. The Judaizers, half-converted Jews, caused severe disturbances among Paul’s Gentile Christians. Heresies troubled the first four centuries of the Church and schisms and divisions later on became a great scandal to those inside and outside the Church.

This state of affairs was foreseen by Christ and is tolerated by God for His own wise purposes. Today’s parable is Christ’s answer to the question so frequently asked: “Why does God permit evil to triumph so often in this world, why are the wicked allowed to prosper?” The triumph of the wicked is short-lived, the reward of the Christian who suffers from their wickedness is everlasting. The very wickedness and injustices of evil-doers are one of the ways that God uses to perfect His elect. It is only on a battlefield that a true soldier can be proved.

In the parable, the weed does not destroy the whet. It only makes it more difficult for the wheat to grow to maturity. So it is with the Christian. No one can take his faith from him, but living up to it is made more difficult by the evil influence and bad example of sinners. If some succumb to this evil influence and give up the practice of their faith, the fault is theirs. God can force no man to serve Him.

The patience of the farmer in letting the weed grow on until harvest time, exemplifies the infinite mercy of God toward sinners. The weed could not change its nature, but the sinner can change his ways and God gives him every chance and every help to do this, up to his last moment of life. No sinner will be excluded from heaven because of the sins he committed but because he did not repent of these sins while he had the opportunity.

We must learn a double lesson of patience from this parable. First, to be patient with those who make our spiritual progress more difficult for us – they are actually helping us to be better Christians if we bear with patience the injuries they inflict on us. Second, we must try to imitate the patience God shows in His dealings with sinners. While we must not approve of their evil deeds, or their sins, we must still look on them as our brothers and do all in our power to put them back on the right road to heaven. We can do this by good example, and by fervent prayer for their conversion. This is not easy for human nature, but we can be certain that God will give us the necessary grace and strength to subdue our natural weakness and aversion, if we try to act with charity and true brotherly interest toward our erring fellowmen.

By acting thus, we will not only be helping a weak brother on the rugged road to heaven, we will also be making doubly sure of our own arrival there, for God will never be outdone in generosity.

Prayer: Lord Jesus Christ, forgive me for having written some people off as beyond help. Knowing Your love and patience toward me, I am compelled to pray that every “hopeless case” will make it into Your Kingdom. I pray for an abundant harvest of the finest wheat. Amen.

Posted by achristianpilgrim on July 18, 2020 in BIBLICAL REFLECTIONS 2020, PARABLES OF JESUS

Tags: 16th ORDINARY SUNDAY [YEAR A], JESUS CHRIST, THE GOSPEL OF MATTHEW, THE PARABLE OF WEEDS AMONG THE WHEAT