THE COMING OF THE SON OF MAN

THE COMING OF THE SON OF MAN

Christians usually call Jesus “the Son of God” but that was not Jesus’ favorite to describe Himself. Jesus actually preferred the title ”Son of Man”, which occurs 82 times in the Gospels. To this day, Scripture scholars cannot agree about what this title means.

The book of Daniel and another Jewish writing called the Similitudes of Enoch contain the term “Son of Man”. In both places, it refers to a Messiah-like figure God will send at the end of the world to bring salvation and judgment to all people. Some scholars believe this term applies to an individual while others think it stands for Israel. Jesus may have used this title to identify Himself as the Messiah.

Some of the Jewish people expected the Messiah to be a political and military figure who would lead them in battle against their enemies. They believed he would be a human being who, because he was gifted with God’s own Spirit, would be victorious in battle and would conquer the world. Through him, God would  establish a new order in the world, in which there would be no more wars, famines, or evil of any kind. This new order is what some Jews called “the reign of God” or “The Kingdom of God”.

Although Jesus did not fight any human enemies, He did score a victory over the most powerful enemy, the devil, and He promised to return one day to finish the job. When that happens, God will be in complete control of the world, and because the reign of God will be here in its entirety, there won’t be any more wars or evil of any kind.

Two sentences in today’s Gospel particularly interest some Christian groups. Jesus says that two men will be in the field and two women will be at the grindstone. One man and one woman will be taken and the other two will be left. Because of this passage, some Christians believe that at Jesus’ second coming He will snatch up bodily those who are faithful to Him and will take them to heaven so they will spared the suffering that will take place at the end of the world. This is what some Christians call “th rapture”.

If the world ended today, would we (you and I) be ready to meet Jesus, the Messiah? How will you and your family use this Advent season to prepare for Jesus’ return?

(Adapted from Jerome J. Sabatowich, Cycling Through the Gospels – Gospel Commentaries for Cycles A, B, and C, pages 2-3.)

Prayer: Lord Jesus, I want to devote Advent to preparing for Your coming into the world. Help me to immerse myself in Your love through the sacraments, prayer, Scripture, and repentance. Let the darkness of my sins give way to Your irresistible light. Thank You, Lord Jesus. Amen.

Posted by achristianpilgrim on November 30, 2019 in BIBLICAL REFLECTIONS 2019, PAROUSIA AND ESCHATOLOGY, THE SEASONS OF ADVENT, CHRISTMAS AND NEW YEAR

Tags: SON OF GOD, SON OF MAN, THE END TIME 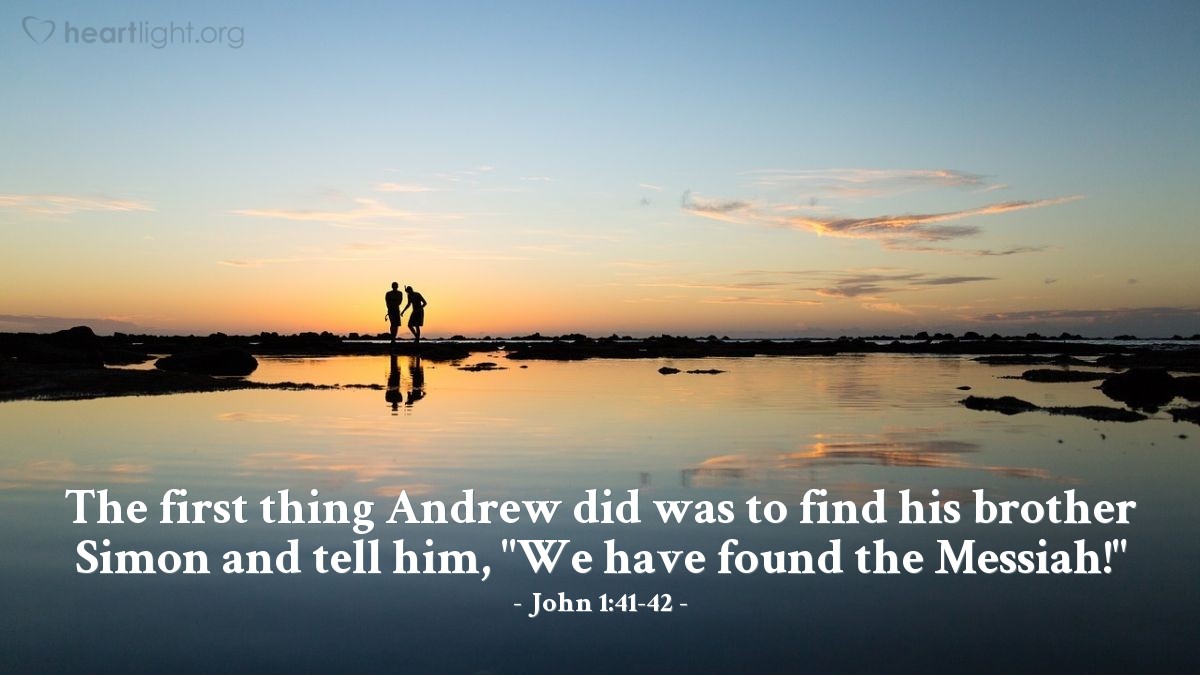 Posted by achristianpilgrim on November 30, 2019 in QUOTABLE BIBLICAL QUOTES 2019

Tags: ANDREW-THE BROTHER OF SIMON PETER, ONE OF THE FIRST DISCIPLES OF JESUS, THE GOSPEL OF JOHN

Posted by achristianpilgrim on November 29, 2019 in PARABLES OF JESUS, QUOTABLE BIBLICAL QUOTES 2019

Posted by achristianpilgrim on November 28, 2019 in QUOTABLE BIBLICAL QUOTES 2019

Tags: JESUS CHRIST, THE COMING OF THE THE SON OF MAN, THE GOSPEL OF LUKE, THE GREAT TRIBULATION

Posted by achristianpilgrim on November 27, 2019 in QUOTABLE BIBLICAL QUOTES 2019

Tags: THE COMING PERSECUTION, THE GOSPEL OF LUKE

“…… Spouses can also learn to pray like this: LORD, GIVE US THIS DAY OUR DAILY LOVE.” (Pope Francis)

Posted by achristianpilgrim on November 26, 2019 in QUOTABLE QUOTES 2019

Posted by achristianpilgrim on November 25, 2019 in QUOTABLE BIBLICAL QUOTES 2019

Tags: FIRST LETTER OF PETER, HE CARES FOR YOU

Posted by achristianpilgrim on November 24, 2019 in QUOTABLE BIBLICAL QUOTES 2019

Tags: FIRST LETTER OF PAUL TO THE CORINTHIANS, HOLY SPIRIT

Posted by achristianpilgrim on November 24, 2019 in MISCELLANY

Tags: CHRIST THE KING, JESUS CHRIST, THE LAST SUNDAY OF THE YEAR-C

And when they came to the place which is called The Skull, there they crucified Him, and the criminals, one on the right and one on the left. And Jesus said, “Father, forgive them; for they know not what they do.” And they cast lots to divide His garments. And the people stood by, watching; but the rulers scoffed at Him, saying, “He saved others; let Him save Himself, if He is the Christ of God, His Chosen One!” The soldiers also mocked Him, coming up and offering Him vinegar, and saying, “If You are the King of the Jews, save Yourself!” There was also an inscription over Him, “This is the King of the Jews.”

One of the criminals who were hanged railed at Him, saying, “Are You not the Christ? Save Yourself and us!” But the other rebuked Him, saying, “Do you not fear God, since you are under the same sentence of condemnation? And we indeed justly; for we are receiving the due reward of our deeds; but this Man had done nothing wrong.” And he said, “Jesus, remember me when You come in your kingly power.” And He said to him, “Truly, I say to you, today you will be with Me in Paradise.” (Luke 23:35-43 RSV)

Because a king is the embodiment of his kingdom, whatever you do to him, you also do to his subjects. Thus insulting the king is just like insulting all the people he rules, and honoring him is like honoring the entire kingdom. The king, for his part, acts in the name of all of his subjects. When he forgives or pardons, the entire kingdom forgives or pardons through him.

Being our King, Jesus died on the cross not as an individual but as our representative. In a way, we were also tortured and nailed to the cross with Him. That is why Jesus’ suffering and death atoned for our sins, something that would not have been possible if Jesus were not our King.

Just as we can say we hung on the cross and died with Jesus, we can also use the same reasoning to claim we have risen from the dead with Him. Death no longer has power over Jesus nor any power over us. At the end of the world, we will rise from our graves, never to die again. This is a central teaching of our Christian faith.

In today’s Gospel, the crowd, the soldiers, and one of the thieves crucified next to Jesus mock Him, contemptuously asking if He is the Messiah they are expecting. Because God was supposed to anoint the Messiah with His Spirit, some of the Jews believed the Messiah would lead them in battle against their enemies and would eventually gain control of the world. Jesus, who was neither a successful  military leader nor a powerful political figure, failed to meet these expectations when He suffered a very disgraceful death as a common criminal. It seemed like Jesus was the exact opposite of what the Messiah was supposed to be.

When the Romans led a man outside the city for crucifixion, a soldier usually went before him carrying a sign announcing the man’s crime. The soldier later nailed his sign to the top of the cross. In today’s Gospel, the inscription above Jesus’ head identifies Him as the King of the Jews, a charge that, according to John’s Gospel, appeared in Latin, Hebrew, and Greek. In pictures of the crucified Jesus, this sign usually contains the letters INRI, the first letters of the Latin words Iesus Nazaraenus, Rex Judaeorum, which means “Jesus of Nazareth, the King of the Jews.”

One of the criminals crucified next to Jesus recognized Him as the Messiah after everyone else gave up on Him. How easily do we (you and I) give up on Jesus when He doesn’t respond as we expect? We must have the faith to accept Jesus as our own Messiah – Lord and Savior – even when things do not go our way.

(Adapted from Jerome J. Sabatowich, Cycling Through the Gospels – Gospel Commentaries for Cycles A, B, and C, pages 340-341.)

Prayer: Lord Jesus Christ, we adore You as our King! We are indeed thankful that You protect us, care for us, and hear us when we call to You. Grant us Your goodness and mercy all the days of our lives. May we dwell with You in Your Kingdom forever! Amen.

Posted by achristianpilgrim on November 23, 2019 in BIBLICAL REFLECTIONS 2019