You can almost hear the exasperation in the voice of these two followers of Jesus Christ: “We had hoped that He was the one to redeem Israel. Yes, and besides all this, it is now the third day since these things took place” (Luke 24:21).

Although the grapevine was ripe with rumors that their hero was alive, they hadn’t seen Jesus. Since it was now the third day since His disgraceful death, they concluded that his prophet was not coming back to liberate the Jews from oppressive foreign rule. His promises sounded empty to them. 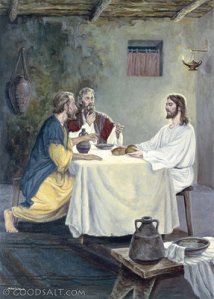 At times we may experience disappointment as these two disciples did. When money is low and stress is high, for example, or when we are ill and see no signs of recovery, hope can slip away and the temptation not to trust God may draw near. In frustration we may feel that Jesus has abandoned us or that He’s not going to make good on His promise to take care of us after all.

But the good news is that God will fulfill all His promises – just as He fulfilled His promise that He would rise again on the third day (Luke 9:22; 18:33). While the two disciples were hanging their heads in despair and lamenting their unfulfilled hopes, Jesus was standing right before them! Just think: If these two had not unburdened themselves to Him, they might have missed Pentecost altogether. Similarly, if the lame beggar in the first reading had not looked up from his brokenness and voiced his need, he might not have received healing in Jesus’ name (Acts 3:1-10).

Jesus is waiting for you to look up from your brokenness and see the healing he has in store for you. He wants you to unburden yourself to Him and trust that He wants to help you in your trial and disappointments. He is with you always, just as He promised (Matthew 28:20). You can always call to Him, because He cares for you. He loves you so much, in fact, that He went to the grave and back for you. May His Holy Spirit open our eyes to recognize the risen Jesus, the Lord of miracles!

Posted by achristianpilgrim on April 24, 2019 in LENT AND EASTERTIDE, TODAY'S THOUGHT 2019